Abena Sankofa On The Writing Process 0

What is the Snowflake method, and did it work for me?

Well, before I get into it, a brief disclaimer: the man behind the Snowflake method, best-selling author Randy Ingermanson, is an authority on the subject — so I the article below is not a critique, it’s purely an exercise in figuring out:

A) is your writing style is like mine, and

B) if it is, would the Snowflake Method layer well on top of that?

So, when I heard of The Snowflake Method the first time, from a friend of family, my sister and I immediately ran to the P.C. to look up what that was:

And here, you can read the official description at advancedfictionwriting.com.

But here is my paraphrase: You start with a sentence, a kind of a movie-logline, of what makes this story special.  (I came up with mine waaay after the story’s beginnings in 2011, just last year, 2021):

“A teenage songstress-turned sleuth matches wits with the most dangerous syndicate in Chicago in a race to find an inheritance worth millions.”

The only problem was (for me, that is): I came up with that one line last year, after *ten* years spent shaping the story, meditating on its structure, and then switching to my marketing phase: figuring out what about it would most appeal to the market, not necessarily myself.

Because, you see, what catches your fancy about your story might not be *necessarily* what eventually interests the publishing world.

With my long-held interest in the history of the Underground Railroad, what I found most interesting about my own tale at the time, was the escape from their initial home, and their edge-of-your seat escape Northward, and gradually putting down roots, and learning the ways of the jazzy, swanky North with its bright lights and opportunity.  It was the slow build that interested me, the cultural sweep of Phyllis’ coming-of-age story.  And I needed to sit with that, expand on it, and only ten years later did it slowly dawn on me that it was the city slicksters and the crime ring that would probably mostly catch the everyone else’s attention.

So, what I’m saying is, don’t beat yourself up if your initial logline is more of a wispy half-paragraph, and when read aloud, it doesn’t sound like a film trailer: I feel the logline method suits an experienced writer, who’s been in the world of fiction for a while, and has honed an instinctive understanding of their audience.  You (me, really), at the beginning of our long adventure, need not pin down what everyone else is looking for yet—or even what we’re looking for.  We need some space and time to gather our thoughts, and realize why we’re interested in this.

But back to the Snowflake method.  Expand your logline (if you have one) to a paragraph.

Next, add your character’s name (again, my intuitive, zany, out-of-sequence style balks at this, for my character names only come to me when I’m not thinking too hard).

And by Step five, you’ve written a page on each character, their back-story, their aims, their foibles, the lot.

But really, in my experience, I only came up with Smith Owens’ (my top antagonist’s) aims, somewhat later in the process, after I thought of the climax of Book 1.

Suppose the thing he was *really* after was less of a person and more of a thing?  Suppose the long chase, and it’s continuance into the sequel, was because he was after treasure? One rumoured to be in my main character’s family-line, and therefore, a treasure he — wrongly — believes he owns?

And then, I finally had my Antagonist’s back-story.

You see, this style I have (if you can call it that 🤨😆), is a little like Billy in the comic “Family Circle” — it’s a three-yard walk from his front door to the mailbox.  But he’d take the scenic route, walking all round the yard, looking at beetles and interesting things until he remembered what he was actually there to do, and found his way to mailbox.

Similarly, when I’m unsure what to write, I meander, perusing through all the most sentimental scenes I’d most like to see on the big screen. and Oh! up pops a plot solution I hadn’t thought of before.  I find this style so much more organic, and seems to let through the einsfall (a real word for sudden inspiration!) that we’re all looking for.

So, in a nut shell, I would say, don’t strain to summarise your story too soon — that would be like trying to estimate the final, adult height of a child right after it’s born.  Give it a chance.

BUT THEN, PLEASE USE THE SNOWFLAKE METHOD.

What do I mean? Well, here’s what I did:

I attempted to catch hold of, and put on paper, the “soul” of the story, the bite-size flashes of insight from all around the story, and built outward from each one, until they touched and merged, like this:

If you were to look into my notebook right now, you would see amply blocks of text, excerpted from later stretches of the saga, random places in the timeline of my story that just happened to come clearly to mind just then.  This is very important, I wrote them in the order that they came to me easily.  Trying to link them up and write them in sequential order when you feeling out-of-sorts leads to grey, un-feelinged prose, at best, strained re-hashing of tropes one has seen elsewhere, at worst.

I have to pause to give credit where credit is due, however: I’d never have gotten these down without the help of my sister.  I was so timid and hopelessly judgmental of my own handwriting, of things, that I would never have gotten down this amount in such time.  I rather, walked around, and she took dictation.  You could get this effect with text-to-speech, and then freely speak right from your imagination “…And then, X would say this, and Y character would be taken aback, but not respond just then…and then later, it’d be too late…” something like that.  UN-polished, raw thought-matter.

Eventually, I snapped these into order—again, with Big Sister’s help (Thx, Akos!)  and—voila! I had a story-timeline: 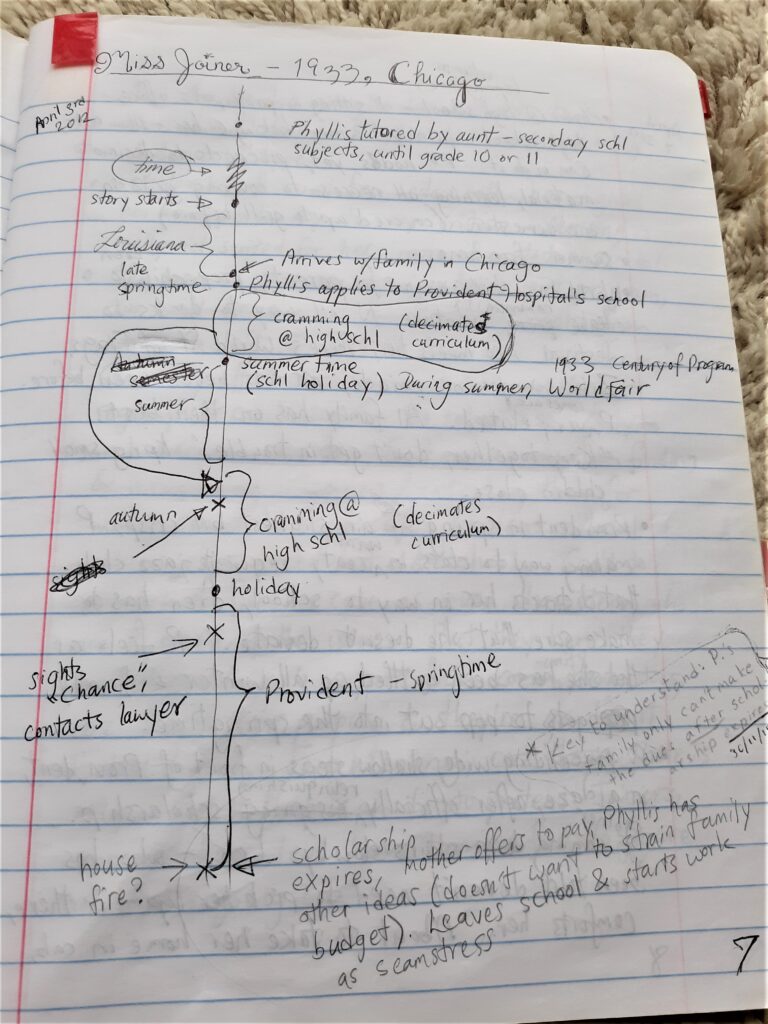 There, I could clearly which parts where done, as if a clay sculpture, to be made from clay patted onto a wire form, I could see which parts of the wire-form were still empty.

I began writing in Word files, copying the journal-notes (that I just spoke about in post-before-last, “How to make a Scene come Alive”!) onto Word documents, and there, finally, the process naturally coaxed me to keep adding more.  Always referring back to my written time-line, I knew what direction to each scene things in.

And there it happened.  Up North.

No matter how finished you feel at the end of this, the next step is absolutely to edit it yourself, (take out all the parts where you couldn’t decide which way to write a given scene, the places where you inevitably find yourself stuck no matter how long you look at it.  For that, I have two possible solutions, as seen in my next planned Blog Post “Can There Be Too Much Editing?” which I’m thinking of re-naming: “Gosh, Now I’m in a Fine Pickle”:

But here’s a tantalizing teaser: Tip #1: Write it both ways—don’t choose, not just yet.

And as Johnny Carson’s famous go-to-break montage used to say, “More to Come….”